Have you checked out all my blogs?

Also if for some reason I can't post I will try to give a head's up on the Facebook page so check there too.

This week we are making a mop for the dolls to do some cleaning around their house. I actually got this idea when I was doing some cleaning up in my craft room. I had some dowels that I needed to put away and as I was carrying the package of dowels I noticed some little doll size buckets I had purchased some time ago. All it took was a glance at the two items and the little light bulb in my head popped on. A mop would be perfect. 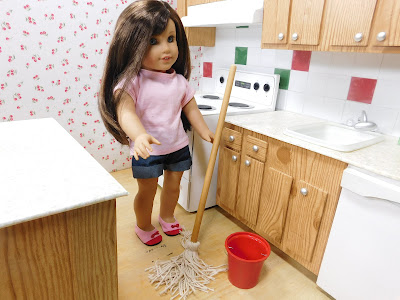 I decided to make a string mop because first off they are the easiest to make. Also though a certain doll manufacturer has come out with a couple of different dolls lately that “live” in the 1950's and 1960's and I thought this would be a fun addition for those that like to keep their dolls in their own historical environments.

Since a quick Google search told me that the first patent for a mop was awarded in the 1890's I guess there are a few other dolls out there that could be using this little project.

The first thing you will need is a handle for your mop. I like to use a ½” dowel for that part. This size looks about correct as far as scale goes and it will fit in the doll's hand properly. I cut mine about 15” long which is pretty close to accurate scale wise. 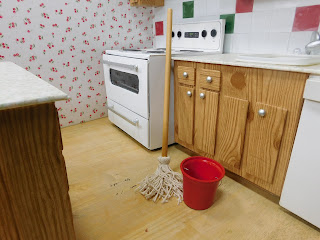 For the “string” part of our string mop I looked at several options and found the string sold for kitchen use to be the best size for my mop and it was fairly cheap. I got a package for $1.99 in the regular grocery store. I bought two packages since I really wasn't sure how far it would go until I got the mop made. As it ended up I only used about half or less of the package.

I decided that for my use the two layers of string once folded was plenty. If you want your mop to look more full add another layer, just follow the same instructions as I gave for the second layer.

I love how the mop turned out and I am looking forward to doing many photos with it in the future.

Of course when I got the mop made the bucket was way too small to use so I quickly made a bucket to use in the pictures. If you guys want to have a tutorial on the bucket just let me know and I can film that soon. 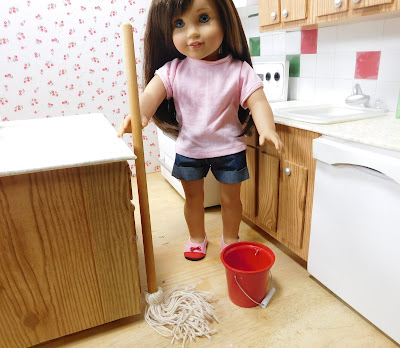 Email ThisBlogThis!Share to TwitterShare to FacebookShare to Pinterest
Labels: tutorial

Hi everyone! I am so happy you stopped by my blog. I wanted to introduce myself to you all. My name is Joanne and I live in the state of Oregon in the US. I am the mom of 4 now adult kids. I love to sew and create and came upon the world of the 18” dolls almost by accident a few years ago. I have been working with dollhouse miniatures for many years, mostly making tiny foods out of polymer clay. I love to adapt those skills along with other skills to making things for the 18” dolls.

I hope you enjoy your visit to my blog. Feel free to look around there are a lot of projects already up. If you are looking to make something special for your dolls and need help let me know. If I can I would be happy to make a tutorial for you.

I also have non-tutorial blogs on here too. Some of my favorites are the “Allison's Journal” ones. Those are stories from the perspective of one of my dolls. She and her siblings and friends like to do things and sometimes they bring you (the reader) along on the fun.

I look forward to seeing you here again!